Endometriosis is primarily a Kapha problem due to the increasing buildup of cells and overgrowing much like a tumor Endometriosis can also be thought of as a Pitta problem because of the involvement of blood, hormones, and menstruation as well as the inflammatory nature of the disease. Vata is also involved in a number of ways. One is the painful nature of endometriosis which places Vata at the center of the imbalance.


There is the involvement of Apana Vayu in the downward movement of menstrual flow and also the involvement of vata in the circulation of blood. The most obvious sign of the role of Vata is the displacement of endometrial cells from their original location in the uterus to places outside. Therefore, endometriosis is a Sannipatika condition involving all three doshas although the proportion of each may vary to a certain extent according to the individual patient.

Pitta symptoms includes only hemorrhagic patches and thickening of skin are present in endometriosis.I personally consider it a condition of Vata pushing Pitta pushing Kapha out of balance. Endometriosis which is the growth of endometrial cells outside the uterus. This to me, places Vata at the base of the problem & Apana Vayu which holds Pitta (blood) and causes it to move up and around Pitta then becomes vitiated causing heavy bleeding and inflammation.
Gokshura can be recommended to reduce three doshas,Vata, Pitta and Kapha.

This pitta vitiation creates an irritation which induces kapha to enter to provide comfort by coating the irritated area. The kapha influence then causes a buildup of cells and overgrowth. The Sannipatika nature of the disease. I considered endometriosis was that of Yoni Kanda or vaginal tumor   Presence of all three symptoms is that caused by the increase of all three doshas are seen as the features of this disease.

Treatment
Since disease is a result of toxin accumulation, poor nutrition, poor digestion, and imbalances of the mind and nervous system, treatment must include steps to correct the imbalances and reverse the process of disease. The goal of OUR MEDICINE is to Create the body's natural self-healing abilities to  treat endometriosis. 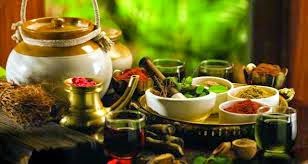 Since endometriosis is a condition of ama accumulation, the treatment should focus on detoxification/reduction or Shodana therapy in order to remove the ama and get the doshas back into their original locations . Therefore Agni therapy is indicated first of all,. Most importantly, the liver should be cleansed or tonified as it has a role in menstruation and hormone production.
The dietary and digestive issues must be addressed.

There are two parts to the digestive issues:

One is the problem of insufficient Agni which is a precursor to ama formation
The issue of proper nutrition endometriosis is primarily a condition of Vata pushing Pitta which eventually pushes kapha out of balance. When Vata and Pitta doshas are successfully reduced, Kapha dosha will retract in response.

The dhatus affected are Rasa dhatu (menstruation) and Rakta dhatu (blood) as well as majja dhatu (nervous system/ pain). The srotas involved are artavavaha srota and also monovaha srota due to the involvement of pain and emotions that accompany the condition.

TREATMENT FOR ENDOMETRIOSIS IN AYURVEDA

The vagina should be filled with powdered red ochre, kernel of mango Irrigation of vagina with decoction of triphala mixes with honey. Drugs for External UseMassage with Shatpushpa oil


I consider problem of HYDROSALPINX arises as a result  of DISTURBANCE OF APAN VAYU. Disturbed apan vayu results in accumulation of secretion at the end of fallopian tubes, which normally flow out in peritoneum. Ayurvedic consultation in India is consult you for this treatment.

Wishing you best of Health always

Please Feel free to write your questions and opinion in below comment box
Posted by Unknown at 22:42